It Takes a Village to Send a Missionary 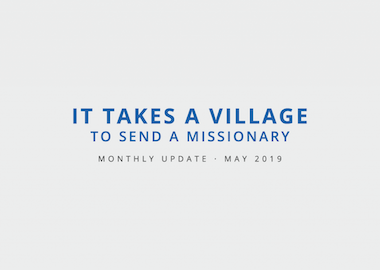 Meet a missionary family working in Asia. He grew up overseas and she grew up at Salem. “I would say Salem has everything to do with me being overseas right now,” she said. “From growing up in the church, I still remember as a kid we learned about missionaries. That was just always a part of the DNA at Salem.”

In Asia, they are house parents for 100 girls at a children’s home. Their typical day includes all the normal things parents might do—times 100! Alongside their work at the children’s home, he is the student pastor at their local church, where they are also actively discipling children and youth.

She visited Asia on a mission trip at age 17. Not too long after that she returned, believing God was calling her to full-time missions. He grew up as the son of a pastor, and seeing some of his father’s struggles, he resisted the idea of going into ministry. But God changed his heart. “I see the situation in my country … the people there, they need God, and that’s my burden to reach them,” he said. Friends in Asia introduced them. They got married—today they serve as a missionary team.

They compare their call to missions to being like a marriage relationship. The commitment it takes for a successful marriage is like the commitment required while serving on the mission field. “There are days when the work is incredibly overwhelming and the idea of coming back to America where things are much more comfortable is very tempting,” she said. “As I press into that and make the choice that I want to stay … He meets that with more love. He meets that with more grace and provides everything I need to do what He’s called me to do.”

“It takes a village to send a missionary.”

“We have an amazing opportunity as believers to reach the world,” she said. “As people living in the Triangle, the world is in our backyard. You don’t have to go far to do that. At the same time, as people on the field full-time—you know that saying, ‘it takes a village to raise a child’—it takes a village to send a missionary. We need prayer. We need support. We are so overwhelmed with needs on the field that we can’t meet by ourselves, we need people who can surround us and pour into those people with us.”

Journey to Bethlehem: Sharing HIS Story

Pass on the Excitement!